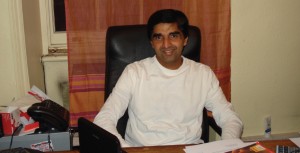 Home is where the hearth is

Das Sreedharan prepares unlikely recipes. And the most unlikely one is he himself: an accountant by training, owner of a successful chain of restaurants, and an apparatchik of home-cooked food! From the teenager who picked up cooking tips from his mother’s kitchen and the vegetable garden she nurtured in Chalakkudy in Kerala, South India, Das has come a long way, literally too. In the distant Britain, he has made classy Londoners admirers of South Indian vegetarian food with all its spices.

When Das started off in 1994 with his first Rasa restaurant, the customers were only Indians. Today, his nine restaurants floor Londoners of all ethnicities who find his offerings irresistible. For non-vegetarians, there is meat and sea-food also, all cooked and served in the same south Indian way. For those who are in a hurry, his Express restaurants serve take-away dishes.

Das is not just a hawker of food. He is more of a seller of the idea of good food. “For me, food is a celebration of life,” he says. For him, it is profoundly linked to everything important in life; health, sense of wellbeing, to those we love and the very world around us. “Surrounded by fast food and junk food and supermarkets, it’s easy to lose the significance of food,” he said. “We strive to prepare the best Indian food: the delicious, home-cooked food, made with the same love, care and thoughtfulness that a mother would devote.” All his chefs attend Rasa Gurukul, his own school of hospitality back in Kerala so that everyone imbibes the spirit of what the boss means, and translate them into products.

He broke the Indian cooking with its myriad ingredients to its basics and convinced the English, who had dreaded it, that “they are very simple, healthier and use little oil”. The art of cooking is simple, and it needs to be so, he declares introducing his book ‘The New Taste of India’. He has also let out the secret of the South Indian cooking: ginger, curry leaves, tamarind and coconut are essential ingredients of all the dishes. “Some are as simple as six,” he says. All of them are added at different stages of the cooking so the flavours are built up in layers.

For Sreedharan, every single ingredient, and every process he employs in cooking, depicts life. Looking at the passion with which he explains what happens when mustard seeds breaks themselves down in boiling coconut oil and add flavour to the curry, you would wonder if he explains about nuclear fission. You would feel he adds love, passion, care and goodness in the recipe to make his offerings whole. Das believes it does not require too much time and effort to cook good food. “It’s just there,” he says, “available, sometimes nicer than others, and easily thrown away if we don’t like it.” And the restaurants are not just eating joints: they are a platform where Indian classical art and music treat the connoisseurs to their hearts full.

The ace chef does not limit his reach to food: he talks beyond it. “To have good food, we need to respect the environment in which it grows,” he says. “Being part of this link between farming, gardening and cooking is to experience something very basic yet very profound, something in this world of ours that is good not only for each of us, but all of us at the same time.” Das now owns a beautiful riverside farm in Kerala which he has converted into Rasa Gurukul, a centre for culinary excellence, hospitality and culture to be open to guests where they can learn many things, and through its relaxed but deeply engaging daily schedules. He has plans to set up a similar project in the UK.

The Rasa Spice Trail Tour, another unique offering, takes guests on a culinary and spiritual journey around Kerala with Das as leader. He also hosts ‘An Evening With Das’ at his restaurants, an evening of story telling where he shares food facts and cookery skills. Now that he has tasted the first blood in cooking, he wants everybody to enjoy it. “We are starting a programme this year to give professional training in traditional Indian vegetarian cooking,” Das says. “Our programme is conceived to provide not only training in the art of cooking, but also to instill a deeper connection with nature and the ingredients through organic farming, and also to promote community involvement through interactions with the elderly and children.”

The programme also aims at addressing the isolation of chefs by bringing in more meaningful interaction with people: be it the customers who appreciate their art as chefs or fellow staff or anyone from the community who want to share their wisdom and experience. Like food, like business: it’s healthy when whole.

The Essence Of Indian Cooking

‘The New Tastes of India’ is a user’s guide to South Indian vegetarian cooking. It never takes the beaten track of describing cooking as a great adventure. Instead, it breaks down the process to its basics, explaining the ingredients, where to buy them and store them and what are the ways in which they are used. It covers a variety of dishes including snacks, pickles & chutneys, soups, side dishes, thorans and salads. True to a guide, there is an introduction to everything he says in the book: there is one to the book which says how simple South Indian vegetarian cooking is, then one to the sections, like ‘curries’, which informs the general nature of what they are and when they are used. And there is an introduction to each recipe as well! The writer never talks like an expert, but easily connects himself to the reader. Introducing ‘Spinach with baby potatoes,’ he says, “According to my father, this dish is a fusion of Indian and English cuisine that originated during colonial times.” It surely is meant to be used in kitchens, and not to be stored in libraries.

Easy Indian is a collection of recipes he gathered from his homeland as well as his own discoveries in his Rasa restaurants. The variety of recipes in the book is amazing in that it ranges from snacks to fashionable Indian dishes. Both the book have one thing in common: compelling the reader to love his home cooked food.