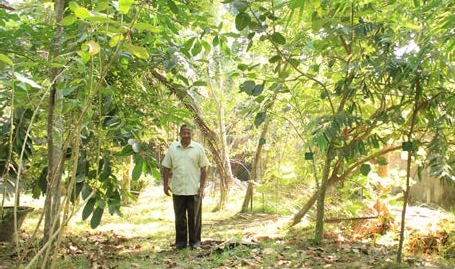 The Bid to Save the Greens

" Alungal Farm, spread over an acre and half right in the midst of the hectic area of Thammanam, houses a wide range of plants, some of which are highly medicinal and academic reserves and some that are endangered. "

Preserving around 1800 varieties of medicinal plants and 300 fruit varieties, A.V. Purushothama Kamath of ‘Gurukulam’ has made his home a green abode.

What began as an effort to protect the flora later turned out to be a passion for this former bank officer who is now a familiar face among the horticulturists in the State.

His ‘Alungal Farm’, spread over an acre and half right in the midst of the hectic area of Thammanam, houses a wide range of plants, some of which are highly medicinal and academic reserves and some that are endangered. “Once you earnestly start investing your heart in this field, money ceases to matter. The sense of satisfaction these plants give is immense, ” says Kamath who has as his visitors, students of Botany, Ayurveda and Ecology and numerous others interested in protecting greenery.

“Last time a group from a hospital in Bangalore came and collected plants from us. Students from Goa and Odisha too have come here to see the place and to do projects, ” he said. Occasionally, he also gets surprise visits from people like CPI state secretary Pannyan Raveendran, and renowned environmentalists and some of the High Court judges.

He now looks forward to taking part in the next flower event at Hill Palace, Tripunithura, soon. “It feels great when people come and tell me that they never knew the plants which grew in their courtyard had such great value, ” says Kamath who is used to getting such appreciation.

Besides the individual herbs, he also has a collection of what he calls the plant sets, like the Nakshatravruksham, Dashamoolam, Dashapushpam, Trikadu, Triphala, Trigandha, Trijaatham, Panjavalkam, Naalpaamaram etc. “Next time we will have the Raashimarangal too, ” he feels optimistic about the collection that is in the pipeline. This set corresponds to the Malayalam birth chart (horoscope).

Kamath’s efforts to preserve the plants have been widely applauded and won him laurels. The Krishi Bhavan Karshakottama Award thrice (1995, 98, 2006), the Coconut Development Board award for the best farmer are a few of them. He was also one among the best 15 farmers chosen by the Biodiversity Board last year. “My dream is to convert the farm into a herbal village, ” he says. He is also collecting the plants describedin Hortus Malabaricus, the most comprehensive treatise of medicinal herbs. “It has been a long-time dream to have an exhibition exclusively for the plants seen in this and I am sure my effort will see its result by the end of this year, ” says the 65-year- old impassioned horticulturist.

The most in demand are the Nakshatavrikshams, Lakshmi Taru, Amukkuram that is used to treat AIDS, Mullatha that treats cancer, Abheeyu, Jabuticaba, Miracle fruit etc. The farmer and his family are now equally particular about collecting the local fruits that are in the process of getting endangered. The Njettukuzhiyan manga for instance. “You don’t see them anymore in cities,” says Chitra, Kamath’s daughter. Hiswife, Ashalatha, and other children, Vinaya and Anand, too, are active participants in the green

" “The workers , even if hired, may not love the plants as we do and I cannot afford to see these being mistreated” "

“We use only vermin compost and biogas, no chemical fertilizer or pesticide, ” says the preserver who is particular about watering and nurturing the farm all alone.
“The workers , even if hired, may not love the plants as we do and I cannot afford to see these being mistreated, ” he says

Considering the herbs as no different from his own children, Kamath eels they share a sort of telepathy. “There is a rapport indeed. We talk to each other and understand”. It was this sense of fulfillment that kept him going even when people around tagged him insane for giving up a decent job and turning to a profession so less remunerative as this. “Today even they take in the oxygen given by these plants, ” he smiles with gratification.

An avid reader of books that give information about plants, Kamath also has to his credit a wide range of them. Sasyashabhavali, Vanavrikshangal, Ayurveda Patchamarunnukal, Vishasasyangal etc. help him in the process. A book that he is writing is in progress and Kammath hopes to impart his knowledge about plant lives to the rest of the world. His articles about five endangered species have already been published in Krishi Bhavan’s journal. He takes classes for ATMA, co-ordinated by the Krishi Bhavan.

“It is not always about money. Lucrative the profession may not be. But you get to take in pure air, healthy food and feel gratified that the earth is protected and you are a part of the process. For me that is most important, ” says the man who has been protecting them for the past 40 years and never once regretted.